Mr. Simoni grew up in the Central Valley just 13 miles west of Escalon in nearby Manteca, Ca.  After graduating from East Union High School, Mr. Simoni began his post secondary education at the College of the Sequoias in Visalia, then went to Westmont College, a private school near Santa Barbara. He received his single subject teaching credential at UOP and later earned his Masters Degree from the University of La Verne.   Mr. Simoni began his professional career at East Union High School as a teacher of the Social Sciences and later served there as the Athletic Director before filling the Vice Principal position.  The 2021/2022 school year is Mr. Simoni's sixth year of service as Principal of Escalon High School.  He looks forward to another great year and feels very honored as he continues to serve the students and families of Escalon High School. 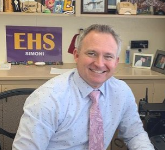